Maria Montessori was among the earliest educational reformers to identify the first plane of development (Birth-6) as critical to establishing core social, emotional, physical and intellectual capacities. As Montessori’s emphasis on the early years is increasingly validated by contemporary science,[1] excellent Montessori education has also been shown to ameliorate the social and educational effects of poverty by attending not just to children, but to the entire family[2]. The Following the Family project is an examination of how that process works. Conducted by Jacqueline Cossentino and funded by the Trust for Learning, the study, which will soon be a book, was designed, in part, to inform the development of future Montessori Family Centers. 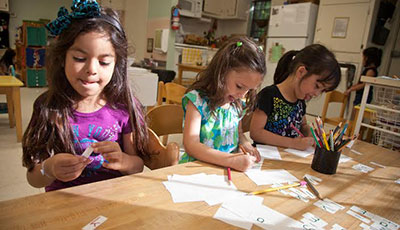 The concept of the Montessori Family Center is grounded simultaneously in Montessori’s historic commitment to releasing human potential through profound respect for the developing child and more recent programming that harnesses Montessori theory and practice in service to children and families in vulnerable communities. Following the Family tells the stories of four such programs; their origins, the manner in which they have engaged children, families and their surrounding communities, and the lessons they offer for early childhood education leaders and practitioners, parents, indeed anyone who cares about the future of our communities.

Each program is grounded in Montessori principles of concentration, independence, respect, and community, and all are emphatically committed to serving families in some of the nation’s most vulnerable communities. Three of the four programs have track records that span a quarter century. All provide seamless programming from before birth through to at least the age of 6. All operate through a blend of public and private funding. And all report remarkable results.